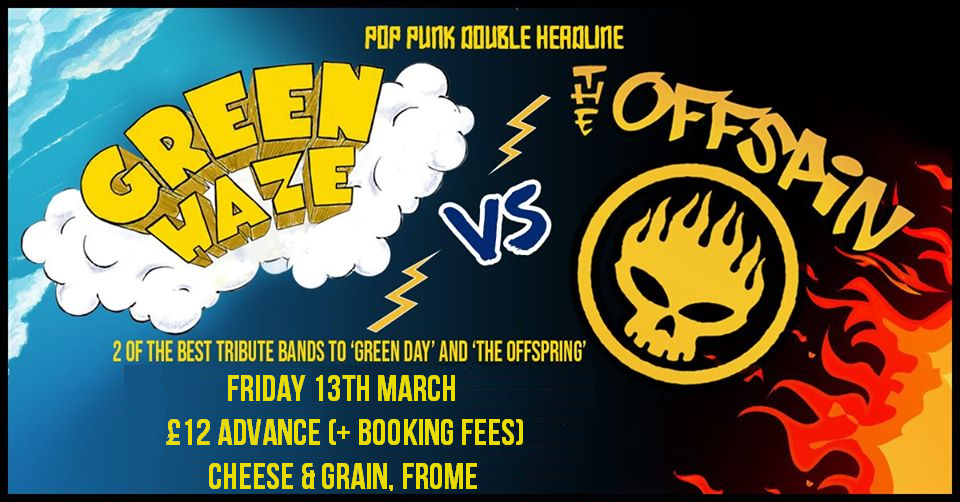 Green Haze vs The Offspin

Buy Tickets
+ Google Calendar
GREEN HAZE are the ultimate tribute to one of the best rock bands the world has ever seen – Green Day. Being inducted into the Rock’n’Roll hall of fame in their first year of eligibility, joining just a handful of bands to ever do so – Green Day have forever cemented themselves as one of the greatest rock bands of all time.
Touring the length and breadth of the UK, Green Haze have rapidly become the UK’s most in-demand and booked Green Day tribute band of choice, playing to sell-out crowds at some of the biggest and most established venues & festivals, including The Manchester Academy, BugJam Festival at The Santa Pod Raceway, The O2 Academies, Scala in London’s Kings Cross & The Brooklyn Bowl at The O2 Arena to name but a few.
GREEN HAZE go to every length to capture the raw power and dynamics of Green Day’s music and bring it to life on stage with a full 2+ hour stage show. With both the MUSIC and the LOOK, their energy-packed show comes complete with costumes, fun crowd interaction, on-stage antics and all of the trimmings that make a Green Day live show so recognisable to their fans. It is this attention to detail that makes Green Haze the most authentic Green Day tribute band on the circuit today.
All of Green Day’s albums are well represented, covering all of the hits like Basket Case, When I Come Around, American Idiot, Holiday, Wake Me Up When September Ends to name but a few. Plus an extensive repertoire of fan favourites to satisfy even the most ardent Green Day fans.
GREEN HAZE perform the songs with the same energy and passion that only true fans of the original band can, this is what makes Green Haze literally THE next best thing to Green Day themselves.

THE OFFSPIN – A Tribute to one of the world’s greatest punk bands, The Offspring have sold over 40 million albums worldwide, with hits such as ‘The Kids Aren’t Alright,’ ‘Original Prankster,’ ‘Come Out And Play’ and ‘Pretty Fly for a White Guy’ to name only a few. They hold the record for the biggest selling indie record of all time “Smash”, which went on to sell over 10 million albums and has gone down in history as one of the best punk records ever.