DOORS 7.30 pm. ADVANCE TICKETS £20
THE FRANKIE MILLER BAND
One of the legendary 70’s Blues/Rock bands, led by original Full House members Ray Minhinnett and Steve Simpson on guitars who toured extensively with the great man, playing on all the classic tracks such as “Be Good to Yourself” , “Fool in Love”, “Jealous Boy” and the smash hit
single “Darling”. Joined by ex Thin Lizzy’s Andy Golden on drums and “Tex” Comer on bass.  A fellow Glaswegian, Gregor McGregor takes the lead vocals which are as close to Frankie’s original vocals and dynamic stage presence as you are going to get.
The band are touring with Frankie’s full blessing who endorsed the band after seeing that their appetite playing his memorable songs still live long in the memory with their dynamism and sheer love of the music they are playing.
A distinctive vocal approach and song writing ability have earned Frankie Miller the respect of his peers, and that is reflected in the number of world renowned artists who have covered his songs. The list includes Rod Stewart, Joe Cocker, Etta James, Cher, The Everley Brothers and Ray Charles
DON’T MISS THE OPPORTUNITY TO CATCH THIS LEGENDARY OUTFIT CELEBRATING OVER 40 YEARS OF ALL THAT’S GREAT IN BRITISH BLUES AND ROCK !!
The Groundhogs

Their show features all the classics from the band’s long and very successful career. Ken’s unorthodox drumming style was always a feature of the live show, which includes all the elements, high energy arrangements and free flowing psychedelic tinged improvisations, anchored by the underlying blues roots that were ever present since the band’s earliest days.

Expect all the classic tracks from the legendary albums,
“Split”, “Thank Christ for the Bomb”, amongst a host of others and there is sure to be a 21st Century version of “Cherry Red”.

A huge success last year together with a standing ovation!
How could we not get him back!
A true Southern Bluesman , hailing from South Carolina, Johnny Mars is the very essence of the Blues.
He has an unrivalled ability to communicate with his audience, with either delivering a perfect vocal line or a devastating harmonica solo. A master of his instrument honed to perfection , learning his trade in the Juke joints of the South, touring with the legendary Magic Sam then moving to the clubs of New York City. Whilst there he played on the same bill as Jimi Hendrix, as well as sharing the stage with B.B. King, Albert King, Albert Collins, John Lee Hooker, Freddie King and Robert Cray amongst a host of others. He has toured with Santana, Alice Cooper and Paul Butterfield. CVs don’t get any better than this.
Johnny Mars has a universal appeal and he reflects the way Muddy Waters  was able to control an audience, reflecting the earthy excitement and rapport between the blues performer and the crowd. Come to a Johnny Mars show for a new experience. Those that have seen him before will already be there.
DON’T MISS THE KING OF THE BLUES HARP ON THIS INCREDIBLE OPENING NIGHT BILL !! 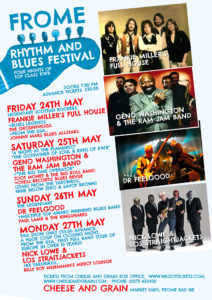