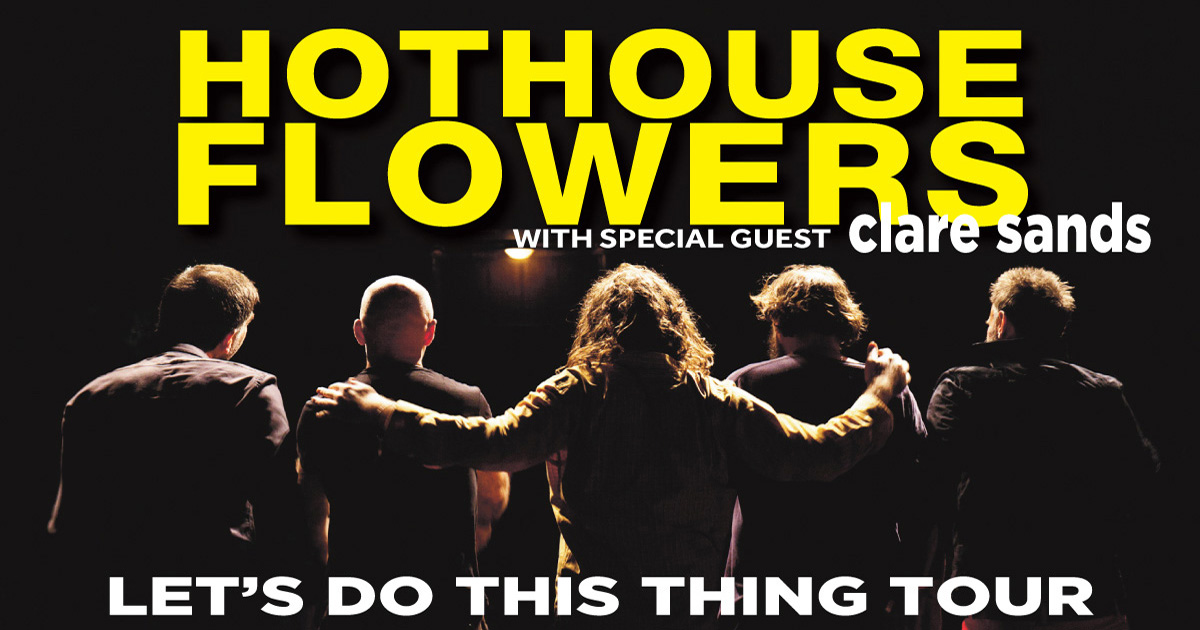 Buy Tickets
+ Google Calendar
Hothouse Flowers
Support from Clare Sands
Thursday 4th May 2023
Cheese & Grain, Frome
Friends presale – 10am – Thursday 10th November
General on sale – 10am – Friday 11th November
HOTHOUSE FLOWERS ANNOUNCE TOUR DATES
“LET’S DO THIS THING TOUR 2023” AKA THE FLOWERS IN MAY!
Something amazing happens when Hothouse Flowers step onto the stage – something that has been shaped by thirty eight years of singing and playing together all over the world, yet no two shows have ever been the same! There is a sense of musical adventure, an impulse to reach new heights and depths in music where the unspoken aim is that the band and the audience become one and the world becomes a different place for a while.
There is an unpredictable energy in the band that harkens back to their “Risk” days playing on the dancefloors of Dublin’s late night clubs or busking in Dublin’s streets by day. They call upon their grand repertoire to create a show that is unique to the time and place. Improvisation can come at any point and allow the band express their brightest and their darkest influences. “Rock and Roll is not about safety or politeness, it is not about perfection either. It is expression and it is spirit.” Humour is also never far from a Hothouse Flowers night. They don’t take themselves too seriously however, there is no mistaking the musical integrity among them as they open up to each other in musical dialogue.
Despite the bands lengthy career which is now in the latter half of its fourth decade there is a sense of unfinished business. Every night they want to play the best gig they have ever played and take the musical risks that can maybe make that possible. There are still songs to be written and emotions to share. Whether its in a tiny club, an arena or in a festival field there is a sense that the best is yet to come.
The band’s touring in Ireland, the UK and on the festival circuit prior to the global pandemic saw them reveal new material from their brand new album Let’s Do This Thing which they released on www.hothouseflowers.com. In March 2020 Let’s Do This Thing was released on all digital platforms just as their touring plans were all put on hold. The band can’t wait to safely get back to their natural habitat in front of a live audience on their Let’s Do This Thing Tour in May of 2023!