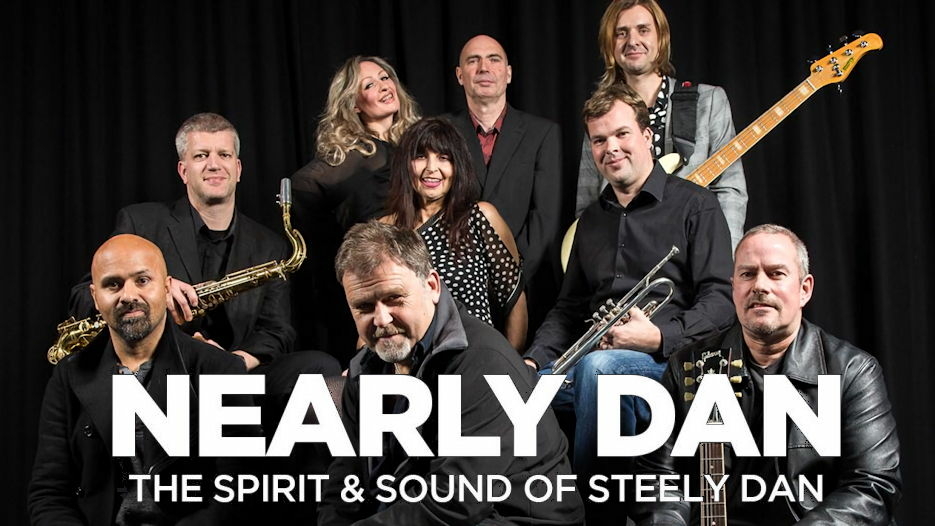 The initial set included a few Steely Dan classics, such as Kid Charlemagne, Josie, and Home At Last. In those early performances it was clear that there was a natural affinity for the meticulously crafted grooves and allusive lyrical style of Donald Fagen and Walter Becker.

As public demand grew, more Dan songs were added, and before long a major proportion of the set was comprised of Steely Dan’s extraordinary three-decade- plus catalogue. It was then that the suggestion of a tribute band was mooted, and Pete wryly named the band, Nearly Dan.

Intensive rehearsal soon followed and, on 25 April 1997, all the hard work culminated in a memorable opening gig at the (now sadly defunct) Wheatsheaf in Stoke-on-Trent.

Since then, Nearly Dan have toured consistently all over the UK and Europe, gaining critical acclaim for their performances, including the Glastonbury and Big Chill festivals, and make regular appearances at the Jazz Café, Camden – a venue that usually eschews tribute bands of any kind. In 2006 the band were invited to play three nights at the prestigious Blue Note Jazz Club in Milan, adding signatures in the dressing room guest book along with those of their heroes, such as Larry Carlton, Chuck Rainey, Robben Ford, Marcus Miller, and the Yellow Jackets.

The band celebrated its tenth anniversary in 2007, continued to flourish in 2009 with appearances at the Birmingham and Coventry Jazz Festivals, and enters 2017 to celebrate 20 years of giving their fans the spirit and sound of Steely Dan.

“When chances to hear the real thing are so uncommon, Nearly Dan’s approach is faithful, though not reverential, and relaxed but as tight as their namesakes, and their uncannily precise imitations are testament to hours of rehearsal and a great deal of talent.”

So, is it as good as seeing the real thing?…well, Nearly…