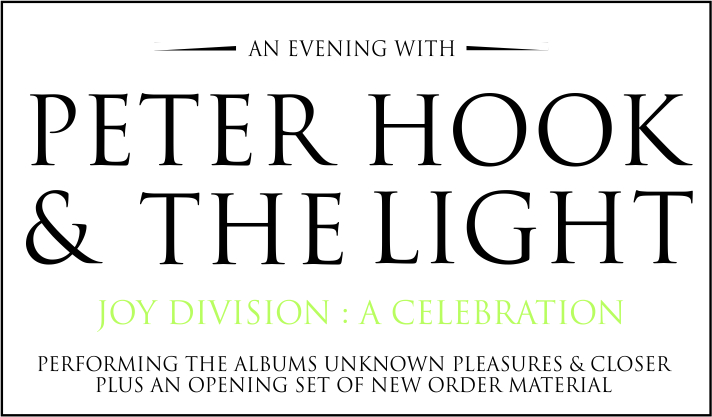 With Peter Hook & The Light having toured their “Joy Division : A Celebration” concerts throughout 2022 with very well received dates across the UK, Europe and North America, the band have now announced a string of nine dates for the acclaimed show in England, Scotland and Wales for April 2023

Taking in both new venues as well as those previously visited by The Light, the tour begins Thurs 13th April at Ulster Hall Edinburgh and takes in The Brickyard Carlisle and Foundry Sheffield on subsequent days that week.

The following week sees the band at The Junction Cambridge, Assembly Rooms Leamington Spa and Tramshed Cardiff April 20th to 22nd whilst the final week of the month sees the band round off at 1865 Southampton, Sub89 Reading and Cheese & Grain, Frome.

The “Joy Division : A Celebration” shows were originally planned to commemorate four decades of the bands and Ian Curtis’ influence in May 2020 and began some two years later to great reactions from fans and critics alike with some quotes from concert reviews here.

“The music is truly joyful, and Hooky belted it out with heartfelt passion. Stripping to the waist for the standing ovation, we had a living example of primal, human, animalistic purity. This was an experience” 5 Stars – The Reviews Hub

“It is probably the best performance and emotional reaction I’ve ever seen at a gig. It is an end to an astounding, astounding gig. A gig I won’t be forgetting for a long, long time. Wow. Simply, Wow.” All Music

“A superb performance that will live long in the memories of those lucky enough to be here.” We Shoot Music

The concerts were also set to celebrate The Light’s 10th anniversary but the April 2023 dates now come some nearly thirteen years from Hooky beginning his odyssey through both his bands’ back catalogues.